Winning a state title in any sport is no small feat. For every athlete in every sport, it all comes down to months and years of hard work that leads to being one of the top teams in the State of Iowa. With winning comes the benefits of celebration, pride, and honor. But what about an annual legacy displayed for everyone to see right in the center of Iowa? Something that thousands and thousands of people see each and every year that acknowledges what a champion has accomplished. We’re talking about the Iowa High School Basketball State Champion display in Wells Fargo Arena. A great celebration of athletic accomplishment that you may not have known was there. 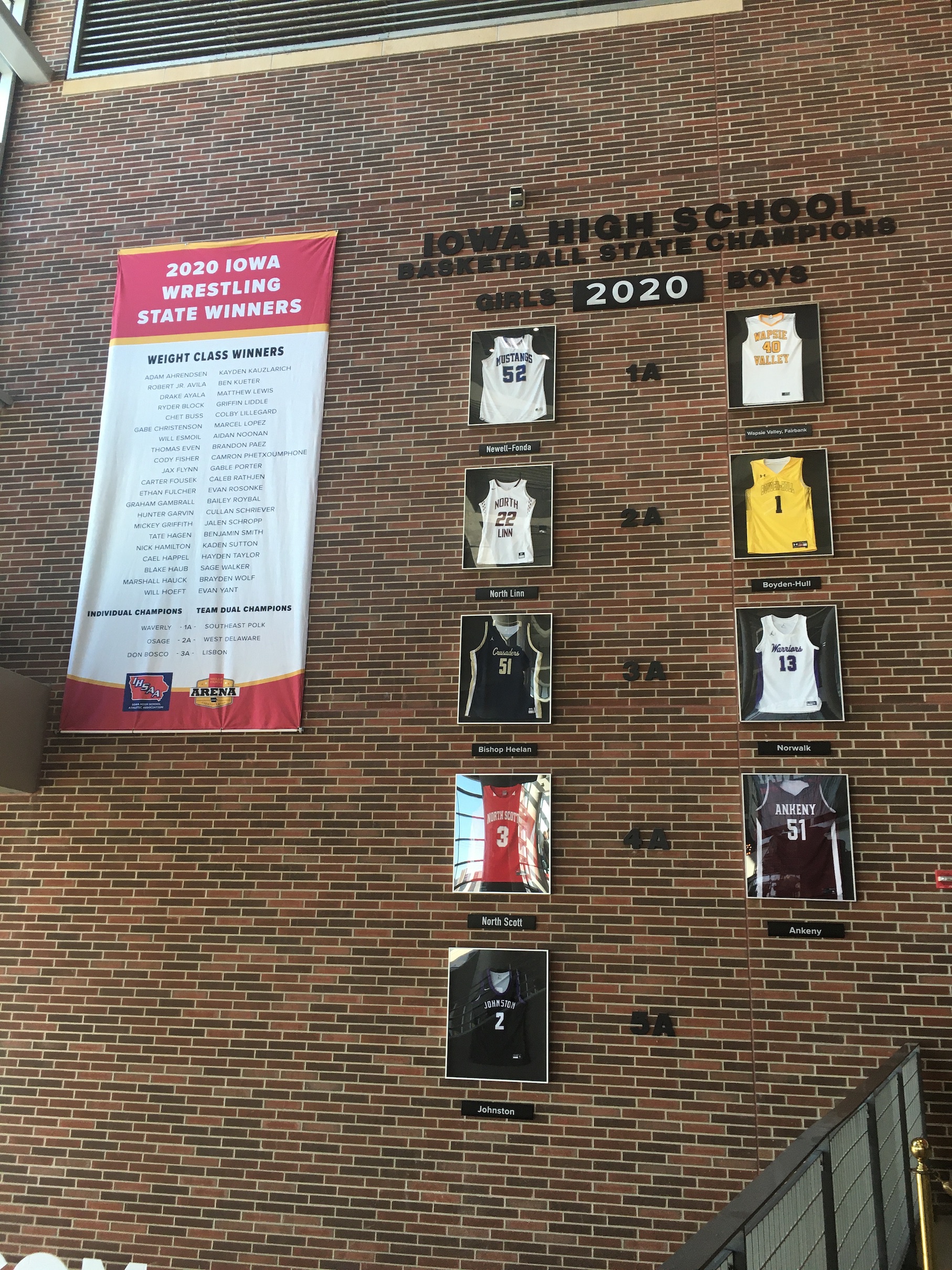 Wells Fargo Arena in Des Moines Iowa opened on July 12th, 2005 as a replacement for the quickly aging Veterans Memorial Auditorium just across the street. “The Well”, as some have nicknamed it, is home to various concerts, conventions, and sporting events. In 2006, Wells Fargo Arena held their first Iowa High School state basketball championships in front of crowds of up to 15,000 people in attendance. Before the tournament’s started in March of 06’, one of the assistant general managers at ‘The Well” came up with an idea that they as an arena should be celebrating basketball and wrestling champions considering they were home to the state tournaments of those respected sports. Due to a short amount of time, and insufficient funds, ‘The Well’ decided to quickly improvise and create a banner to hang in the rafters. “We had a big, ugly, red and yellow banner that hung in the rafters for that year”, said Adam Flack, the Regional Marketing Director for the Iowa Events Center. “After that year of watching it be hung, it just didn’t look appealing, so we started looking for other ideas to be able to enhance that display.” And an idea, they did in fact find,

In 2007, just inside of the south entrance on the west wall in Wells Fargo Arena, they started the display that still sits there to this day. At the time, it was four picture frames to represent the four classes in both boys and girls high school basketball. Below the frames was the defending state champion and in the middle between the boy’s side and the girl’s side, sat the class the team won their title in. In the picture frame, a jersey of the defending champion team. And at the top of it all, a sign read, “Iowa High School State Basketball Champions” with the year just below it. As Adam put it, “it’s a very simple display.” Simple is correct, but it gets the point across in such a unique way. The display remains the same as it was all the way back in 2007 besides the addition of a 5th class on the girl’s side. Adam and his team are easily able to change the school names and numbers within but the tricky part can sometimes be reaching out to the champions to send in a jersey.

While we talked with Adam, he joked about how repeating champions make their job easier simply because they never have to swap out the jersey. If there isn’t a repeat champion, a group of interns that work for the Iowa Events Center will start finding contact information of the head coach or athletic director for the defending winning team. “We will reach out, congratulate them on their championship, explain the process of sending in their jersey, send them a photo of the current display that is up, so they know what it will look like, and then it’s on them to respond and sent it.” Adam went on to explain that they do not dictate which jersey each team sends in. You don’t have to send a home or away jersey, or the jersey that you won the title in (i.e the jersey Ankeny has in the display currently is an older version). Even contrary to popular belief, the jersey display doesn’t have to be the best player on the former team. It’s all up to the school to decide. The actual transferring of the jerseys doesn’t take place until Adam and his team have received every single jersey from all teams because the process of putting them up can be tedious with them having to bring in a lift and such.

There was a situation a couple of years ago where a defending champion team called in the fall saying that they needed their jersey back that was put in the display. They ended up sending the jersey back and luckily the school was able to send a replacement to be put on the display. In the early years of the display’s life, ‘The Well” was having problems getting return phone calls from the state champion teams about sending in their jerseys. Adam and his team would have to take it into their own hands and would end up designing a winning team’s jersey with paper and hang it in the place of a real one. Nowadays, they really haven’t had a problem with that because most teams enjoy the recognition. Even despite the Covid-19 outbreak that almost put a halt to the 2020 IHSAA Tournament back in March, Adam and his team were able to successfully get all the jerseys to Wells Fargo to be hung and displayed. When it comes to sending the teams back their jerseys in the spring, the Iowa Events Center team usually finds the school address and mails them back to the designated location with little to no problems. 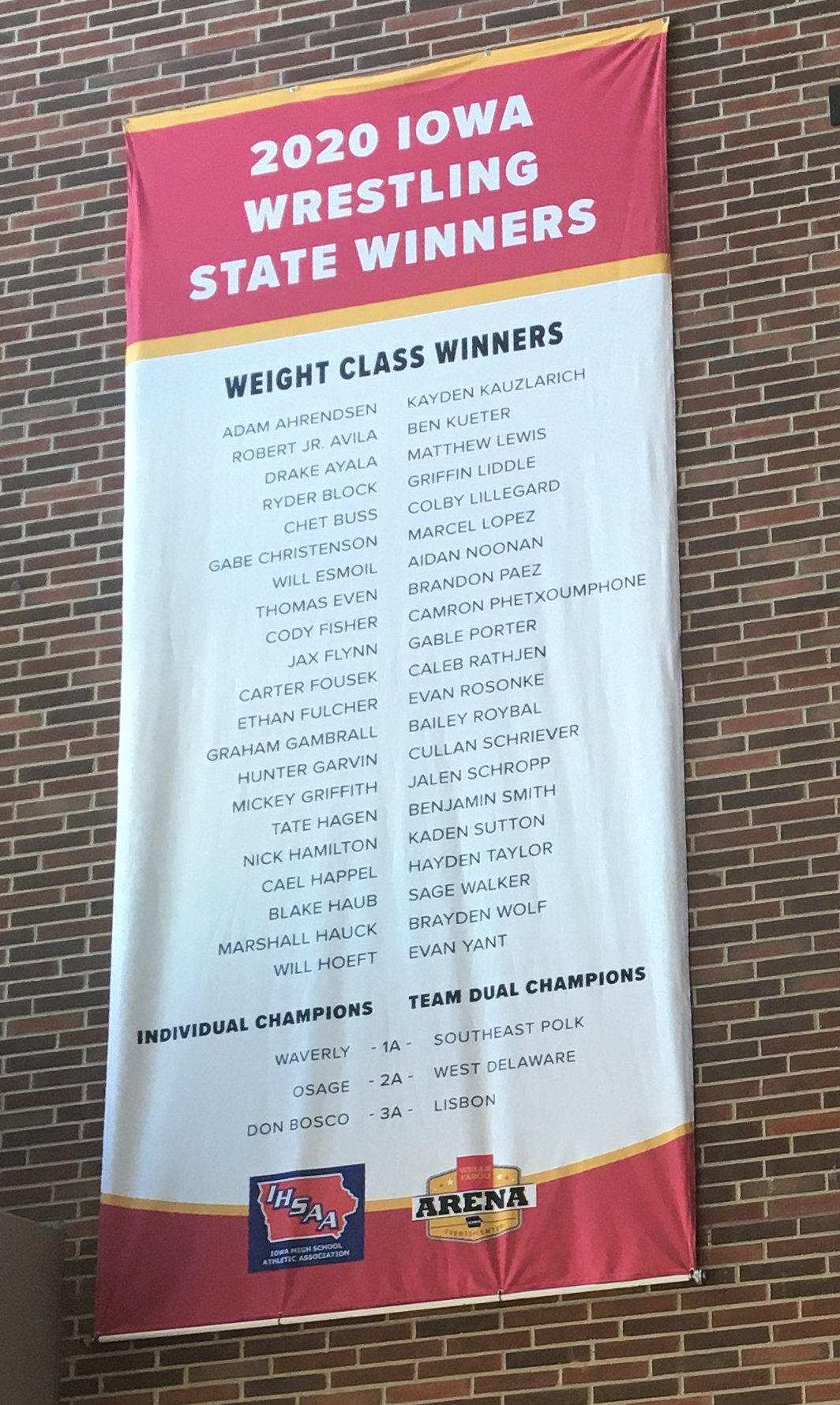 Not only is the jersey display changed, but the wrestling banner next to it also is switched. Every single individual state champion wrestler’s name is put on a banner in alphabetical order and displayed on the west wall right beside the state basketball champ display. The crazy thing about that banner is that ‘The Well’ has kept every single one and they currently don’t have any plans on what to do with them all. “We’ve even had people ask if they could purchase a banner for themselves. We tell them they can’t but where would you even hang that thing? On the outside of a barn? It’s huge!”

The motivation factor for the jersey display has also been proven helpful for certain teams. Back in 2008, Adam got a call from the girl’s Waukee head basketball coach asking if his team could get a tour of Wells Fargo Arena as somewhat of a motivational factor. At that time, the Warriors hadn’t been to the state tournament since 1988 which was during the 6×6 basketball era. The team came down and were taken all around the arena. Where their locker rooms would be, the path they would take on the floor, all of it. They eventually ended the tour at the jersey display where they could see all the teams currently with a state champion status. That motivation helped the Waukee girls as they made it to the state tournament that same year. Since then, the Warriors have made it to 12 out of the last 13 state tournaments including a title in 2015, when their jersey got to hang in the display for the first time in school history.

It’s stories like these that make this display so simple, yet so perfect. Nine teams get to see their achievement year-round at one of the most popular destinations in the state of Iowa. People come from all across the midwest to watch professional sporting events, live concerts, and much more, and all of them see that wall and what those teams have accomplished. You’ll see people stopping and looking at it all the time and some even take photos. And while it’s only been a tradition for a very short time, it’s a tradition that has made its way into athlete’s hearts all across Iowa. So next time you head into Wells Fargo Arena, take a second and appreciate the state champion display on the west wall. It’s a sign of recognition, achievement, and perseverance for some of the best high school teams our great state has to offer.

Seating for this event will be sold via POD groups. This was created to execute a safe seating environment, limiting crossover interaction between fans where possible.

POD seating set in groupings of 2, 3, 4, 5, and 6 seats. Fans must purchase all tickets in a selected POD grouping.

IMPORTANT – PLEASE READ:
The seating for this event is set up with social distancing guidelines. There is an inherent risk of exposure to COVID-19 in any public place where people are present. COVID-19 is an extremely contagious disease that can lead to severe illness and death. Senior citizens and guests with underlying medical conditions are especially vulnerable. By entering the venue, you and your party voluntarily assume all risks related to exposure to COVID-19, and Venue/Promoter disclaims any and all liability related there to.